I work a normal 5x8hr days a week and in January I’ll go to “shift” work, with means four 10hr days.  I say “shift” because to me it seems like a normal day, spending about 9 hours a day at work; so I’m thrilled to spend one more hour and get three days off.  A couple weeks ago I got a brief taste of it, when we had a national holiday on a Friday, as it’s called here “Labor Thanks Giving day” and it was so nice to hang out with Lori and the kids and have a little more time on our hands.

This last week, in keeping with our tradition of going out and exploring every chance we get, I dragged Lori and the kids to the Kyoto Railway Museum.

We started off with a great walk to the train station, and Jack, being so enamored with trains, was naming all the ones we see on the way.  We had a picnic lunch at a great park and regretted not bringing our frisbees (though we’re not sure if we packed them anyway). 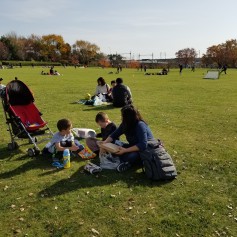 The kids didn’t know we were going to the train museum, they were just told we’re were going to Kyoto and will do ‘something’.  It was neat that every few minutes we’d here a loud steam train whistle and they’d stop what they were doing and look around.

Once we were all done, I packed up the trash, and went (to no avail) to find a trash can; no where in sight.  So, we venture off toward the museum, and come across (of course) a playground!  It was really great to see all these families and kids out playing, I’m sure it was helped by it being a gorgeous day: 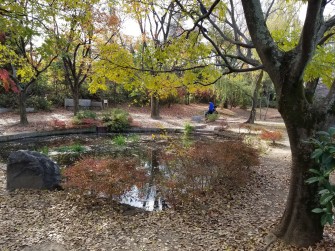 After we pried the kids away from the playground, we keep venturing toward the museum.  Across the tracks, and the kids start to piece together what’s happening. Oh yeah, but first we come across this, posted in almost every place outside we see: 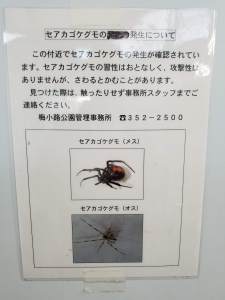 Oh great!  A poisonous spider alert! Well, let’s not worry too much about that.. Got trains to see: 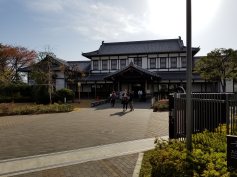 There are some trains outside to view, going from chronological order from an old steamy (Hiro, from Thomas as our kids were keenly aware) to the first generation Shinkansen, more on that one.. 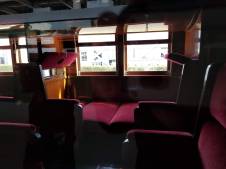 The steam engine inside was the same model, but hooked up to some cars and you could see inside the cockpit.  Similar to US steam engines, the amount of valves and knobs and the fact that you’re driving a bomb is pretty incredible.  The cars it pulled were based on the Pullman coaches, so they had sleepers and dining cars, all pretty posh. 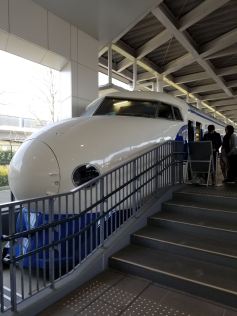 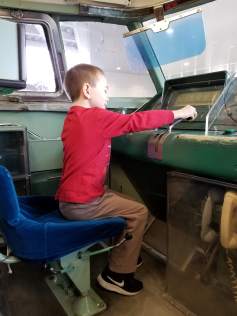 Next was the 1967 Shinkansen – You can clearly see the airplane fuselage styling, and very uhh. narrow door to get in.  What was cool about this is there were obviously a lot of batteries and generators and engines on board, but look at the driver’s console.  It’s pretty much the ‘go fast’ and ‘slow down’ stick.  Also, Z&J’s next album cover..

Then it was Jack’s favorite, the JR500, though unfortunately not open.. I’d imagine it has more than one stick for driving, perhaps two.

Then on to some older trains, the Raicho, with some really cool styling, looking like it’s out of the Thunderbirds: 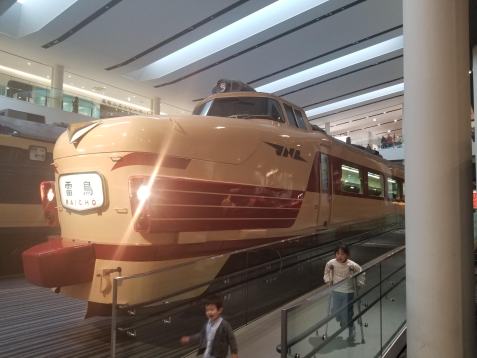 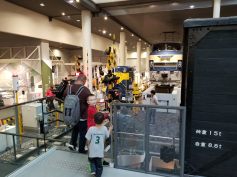 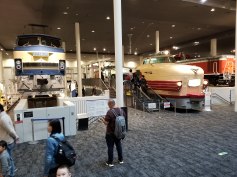 Then there were some neat exhibits on how they controlled the railways, including something I need to translate regarding tokens, and how that apparently kept them from crashing in to each other. 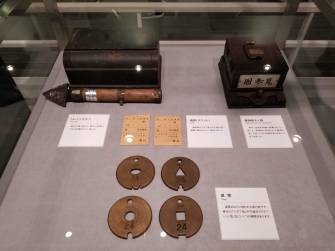 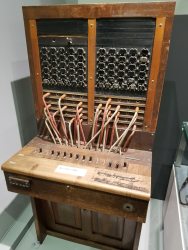 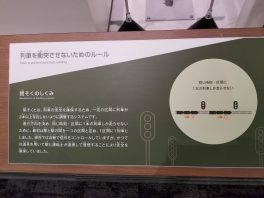 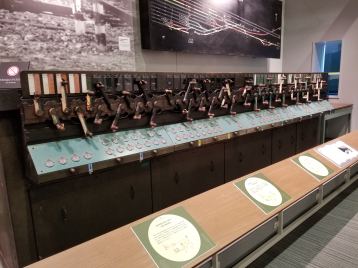 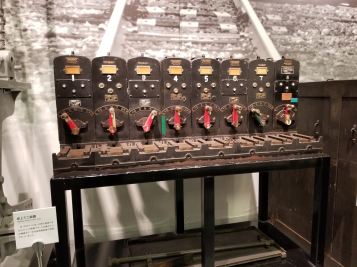 Then it was on to some really nice scale models of several trains: 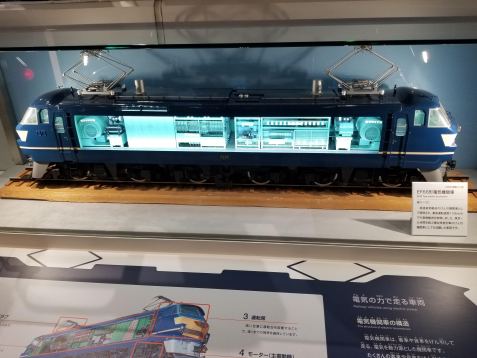 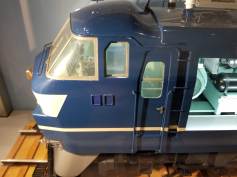 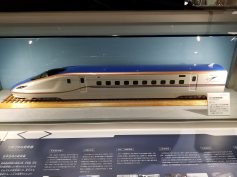 And then some more “Computers” that would handle ticketing, seat reservations, and I have no idea what else – except that last one looks like it’s from Fallout: 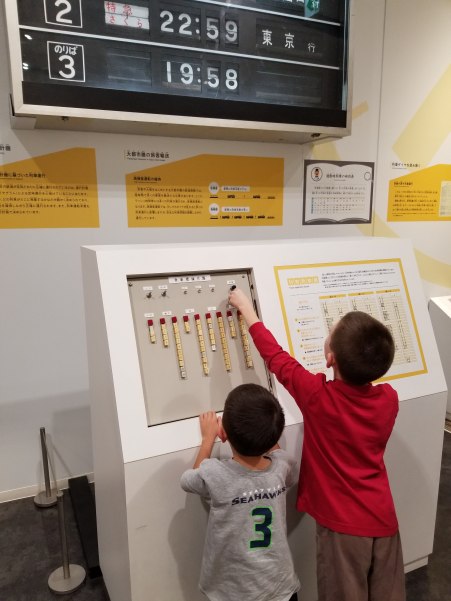 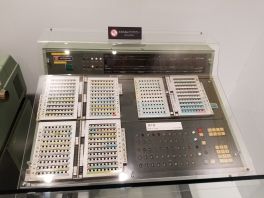 After that it was outside to see the other “Steamies” in “Tidmouth sheds”: 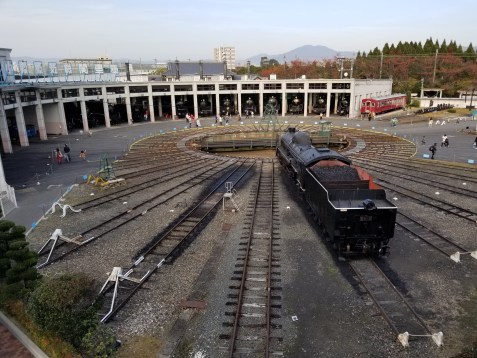 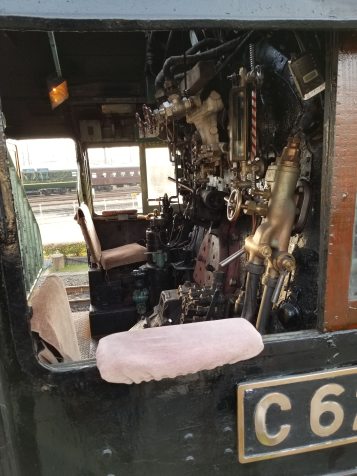 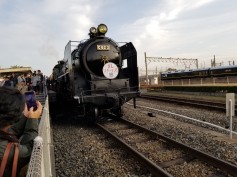 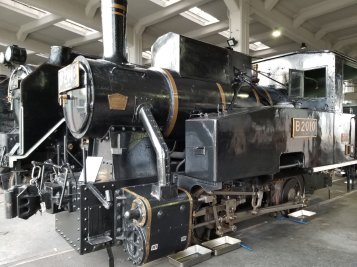 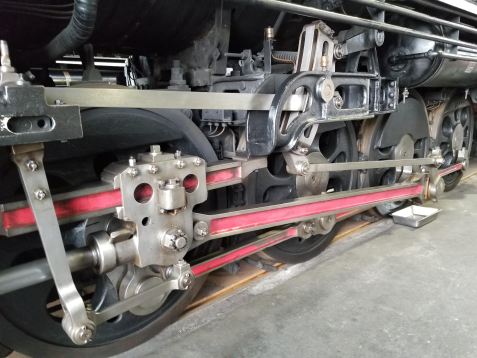 OK, so that last one isn’t a steam engine, but it is cute, and I totally want it.

So after that was our normal post adventure dinner out, and kids begging for ice cream.  We did cave, but we didn’t cave for GOZIPA: 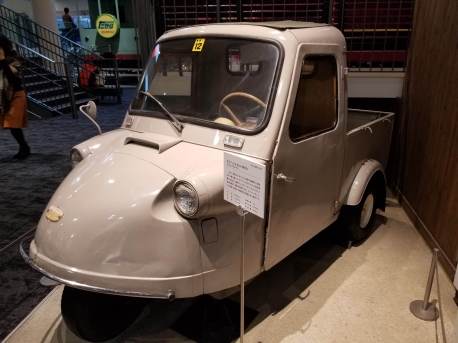 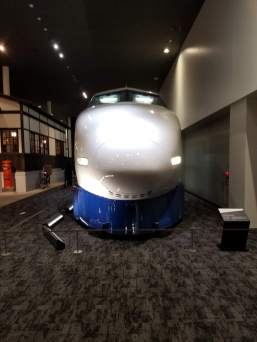