So, Typhoon Trami is barreling down on Osaka. I need to get to Tokyo for work. The winds are projected at 160Kph.   I have no idea how fast that is but it sounds fast.  Like Lori, my mind is going back to the images we saw of the Typhoon Jebi that hit Osaka while we were still in Hawaii; images of roofs being blown off, siding torn away, and cars skittering across a bridge like they were hot wheels toys.

I knew as well that the trains wouldn’t run if there was a serious issue to safety, so I was more concerned with leaving her and the kids here while I am whisked away to Tokyo for a couple days for “New” employee orientation.  I was debating with myself over and over about if I should go or stay – If I stayed, and the weather turned out to be not bad, then I’d really feel like a heel explaining to my new team how I was too scaredy-pants to head out.  If I went and the storm was bad here and I wasn’t around to help Lori and the kids well that’s even worse.  It didn’t help that we went back to Yodobashi Camera [Man I really love hate that place] to look at lights for the apartment, and in the lighting section is.. you guessed it – a guy yelling in to a megaphone to buy batteries and flashlights.  Well, I assume that’s what he was yelling, given his close proximity to a crate full of batteries and flashlights, and the crowd of people around him getting whipped in to a preppers’ frenzy scooping them all up.

Seattle doesn’t get a lot of nasty weather – in the rainy months (Only about 11 1/2 out of the 12), it just kind of drizzle. It was rare to ever hear thunder, and when I did, I’d get nostalgic for the Florida thunderstorms.  We’d have hurricanes seemingly all the time, and they’d get blown out of proportion on the news.  The locals, of which I was for a while, just got to ‘know’ when the storm was going to be dangerous and when it was just another beer party in someone else’s garage.  I kind of felt that way for this one once we saw that the Typhoon strength was mapped to a Category 2 Hurricane (Pfffft.. Cat2?  We wouldn’t even cancel the croquet tournament for that)

So, off I went to Tokyo for Microsoft NEO – (New Employee Orientation).  I went to NEO when I joined Microsoft 5 years ago, but they insisted I do so again, as I am joining a different branch. When they asked if I would like to request a translator, I knew I was in for a real adventure.

I have to go from the train station here at the house to a shinkansen station (most often called Shin-something something, in our case Shin-Osaka.  Fun note:  Shin means ‘new’, and the problem with having the word ‘new’ in the name of something is that eventually it ceases to be new, but I digress).  The weather was getting gloomy, but nothing too bad.  Happily, Lori and the kids came with me to Shin-Osaka station to make sure I get my ticket and get on the right train. Lori points to me to the right platform, I wave good bye and I’m off!

I get to the platform, and see a sea of people, all with bags packed and the same (myself included) panicked looks on their faces.  Adding to the ambiance is the now-expected sound of someone shouting in to a megaphone and me (also now-expected) not knowing what’s going on. 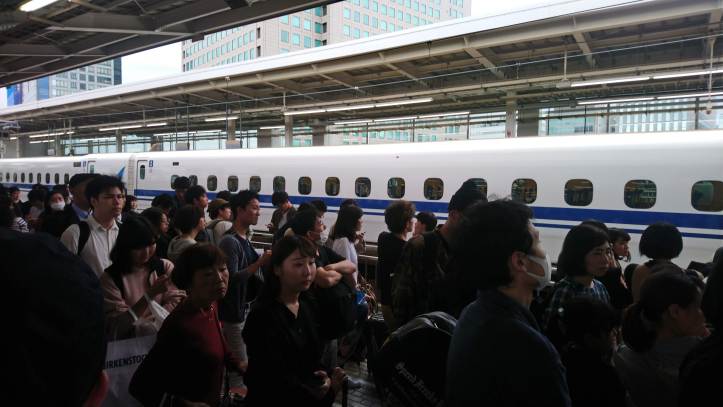 Not going to lie, this part was pretty intense – both sides of the platform were going to Tokyo, and people were running for different trains, very easy to fall in to the same sense of panic.  I had a non-reserved seat, meaning stand in line and hope you get on.  I missed the train that my ticket was for, but waited for the next one.  Didn’t get on that one either, too full.  The third (and I believe last for the day) I was quite literally the last person on, and had to suck it in get the doors closed:

I had to stand the whole trip, but at least I got a window, and of course had to take my requisite video out the window while we were at speed.  Bullet trains are awesome, here’s a few minutes of it if you’re bored:

A pretty uneventful train ride – As I got to the Shinagawa station, I made my way to the hotel – I figured, check in early, put the stuff down and find some food  [Sounds of screeching brakes again]  I get to the lobby and see this: 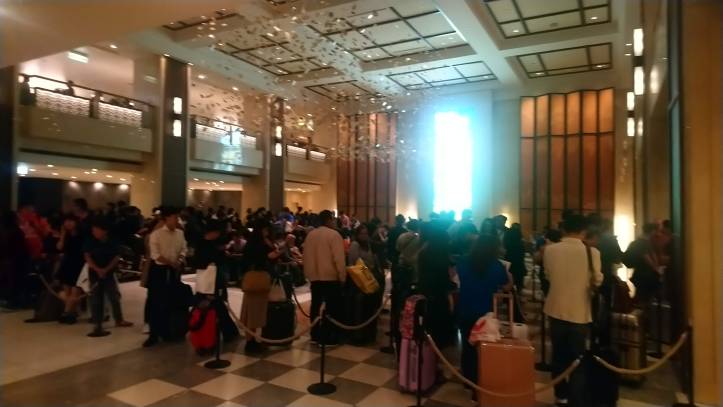 The line to check-in is out and around the block 😦 filled with people that are also trying to avoid the storm.  I later find out the hotel is booked solid. After standing in line for a good 20 minutes, I’m looking around and see all the signage for the hotel (Prince Shinagawa), and the grand east tower in standing in.  I look at my phone reservation for probably the 10th time, seeing only now I’m in the wrong tower.  I slip around the corner and get checked in.

Dinner was some incredible ramen at a shop near the station.  You pay for the food at a vending kiosk, get a ticket and then they bring it to you.  The stranger next to me and I hastily engage in slurping volume contest apparently.  Also apparently, I need more practice.

When I got back to the hotel, the elevator stops on the way up, when the door open, I don’t see anyone, but a few seconds later hear a  “bleep blorp blorp!” and see this little guy roll in to the elevator:

Pretty cool, and a bit freaky after you had a couple of drinks and not expecting the future to arrive so early.  At least it didn’t have chainsaws for arms.

The rest of the NEO experience was pretty uneventful.  I spent two days listening to Microsoft Japan processes and regulations, with the help of translators – it took a lot of coffee to get though, but now I’m an official MS Japan employee.

Watching the news back “home” in Osaka, I felt OK with Lori and the boys being by themselves as the storm got weaker.  It’s a good experience to go through the worry and scramble of an impending natural disaster here, since it can actually happen.

With a population so dense, and limited ways to get away, I can see how future scenarios would be pretty dicey, especially trying to navigate them with the kids.  Thankfully we’re pretty far in-land, and these UR apartments are government built (in a good way: sturdy, all concrete, storm windows, etc) , and earthquake resistant. So unless it’s pretty bad I think the plan will be to shelter in place, so long as we don’t get a definite evacuation notice.  Not looking forward to that though, if it occurs!

Hopefully that little robot can deliver us pizza. Just no squid on it this time..