After signing the lease on the apartment, the next step was to plan how to move our stuff from the AIRBNB in Nishinari-ku to our mansion in Yodogawa-ku, which is about 12 km away (how far way IS that?)  A taxi was out of the question since Michael would be at work and the boys and I would be doing the move on our own.  Taking the subway was also not an option since there are way too many stairs and carrying the 50 lb. large bins would prove impossible.  Shipping it via Yamato transport sounded like our only option until I looked into renting a car.  With the car, I could not only haul all of our things, I could also head to a depaato (department store) and buy bedding, household goods, kitchenware without having to hand carry them on to a bus/subway/train.  It was settled: renting a minivan seemed to be the right choice.

The night before getting the rental car, I couldn’t sleep.  The steering wheel is on the right side and they drive on the left side here.  Would I be able to do it?  I mean, I drove in Japan before, so it shouldn’t be a problem, right?  Albeit 25 years ago–there’s got to be some remnants of muscle memory from that time period, no?  The morning arrived and I found myself getting into the minivan on the left side (like in the States!) with the agent behind me.  I played it off like I opened that left door to put my backpack in and then walked over to the “right” door.  I got in and the agent smiled and closed the door behind me.  I then automatically reached over my left shoulder to pull the seatbelt—wait, I’m grabbing air!  Or right, it’s over my right shoulder.  I smiled at the agent again and he smiled back amused.  This isn’t how I imagined it.  Gulp.  Smile.  Put the car in drive (with my left hand).  My left isn’t coordinated.  Try again.  Put on turn signal.  Nope, that’s the windshield wipers.  Try the other side. Yep, that’s the turn signal.  Press the gas pedal.  Nothing happens.  Disengage parking break.  Smile again at the agent.  Stay on the left.  Stay on the left.  Slowly ease out of the parking spot.  Suddenly, the agent knocks on my window as I pull away.  I slam on the brakes, which startles him and me.  He asks if I need to use the car navigation.  I reply ‘yes’ and realized I would have driven off without GPS guidance, which would have been a complete nightmare.  He sets it to English and I’m on my way.  I make it back to the AIRBNB in 20 minutes with only 4 recalculations by the navigation system.  Which isn’t bad, I thought, until I realized I only drove 2 km (about 1.5 miles?), which my friend Karen can run in half the time! 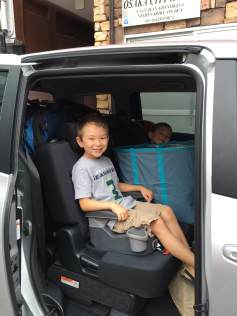 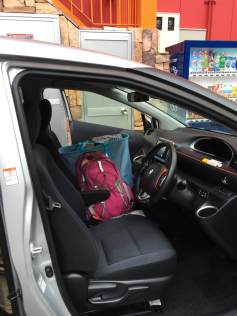 As the day went by, my confidence in driving grew.  I found that as long as I was behind another car, I could remember to stay in the left lane, especially when making right hand turns.  There were only 2 times that I may have ended up in the wrong lane.  Well, 2 that I’m aware of.  I’m ready to rent a car again.  Maybe next week?